Shopping Cart
Your Cart is Empty
Quantity:
Subtotal
Taxes
Shipping
Total
There was an error with PayPalClick here to try again

Thank you for your business!You should be receiving an order confirmation from Paypal shortly.Exit Shopping Cart

SHIBA-INU: A loving, healthy, wonderful companion with proper diligence and training. Descendant from Japan bred to hunt small wild game. "Shiba" means "brushwood", after its hunting terrain or the color of the brushwood leaves when they turn red in the fall. "Inu" means dog in Japanese. A medium sized dog with Females: 13.5 - 15.5" and Males: 14.5 to 16.5" at the withers. Weights vary but should not be over 25 pounds. (Most of our parentage are at the 18# size as adults) Medium boned, compact, well-muscled and very agile. Very active as a puppy but tend to mellow out with age... Minimum care. Fenced yards and locked gates to prevent a child that sees the dog from opening the gate to pet as dogs will bolt and off they go. No need for a special diet, just good high quality kibble; but things such as ground turkey, veggies (not corn), eggs, fish oil supplements, etc. --but not necessary. The need for puppy socialization and obedience classes is a must. They will become the "alpha dog" as they are strong-willed and possessive of their things. They need to learn their manners and how to behave. Puppies tend to use their mouths to "taste" their human, but need to learn not to be rough. Once trained, they are loyal, loving and true to their owner.

Your puppy is from purebred AKC parentage.. and thus comes with AKC papers or another purebred Registry such as APRI (America's Pet Registry) BUT not with breeding rights

REMEMBER: WE DO OUR BEST TO FOLLOW "FIRST COME, FIRST SERVE" BASIS.... SO if there is a puppy you really want, please reserve with a deposit...

YOU AND THUS TAKING THE PUPPY OFF ANY FUTURE ADVERTISEMENTS... THUS THE DEPOSIT IS NON-REFUNDABLE... However, your deposit would be refunded if the puppy does not pass a full vet exam or for some unfortunate problem on our part... We do however, hope that you will take your adoption of your puppy seriously to follow through with your adoption once a deposit is made and to give the puppy a new loving home....

ALL OUR PUPPIES ARE RAISED TO BE FAMILY MEMBERS ONLY, THEY DO NOT COME WITH AKC BREEDING RIGHTS.

If you are a Professional Breeder and want AKC Full Breeding Rights -- that would be EXTRA!!!

There are three Japanese words that describe the Shiba Inu.

Combined, they make a personality that Shiba Inu owners describe as “irresistible.”

"Ka-i” means boldness and bravery, along with mental toughness and composure.

“Ryosei” describes their gentleness and good nature, which makes them

And of course, there's their charm and open spirit, “Soboku.”

It can melt the coldest of hearts.

If you have a cellphone we'd love to send a video of one our last puppies!!!!  So Cute!!! 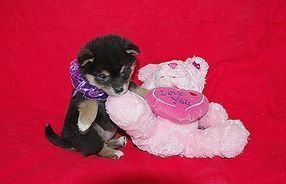 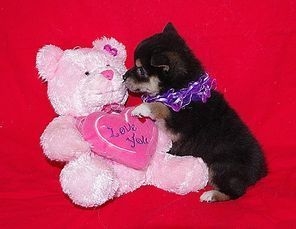 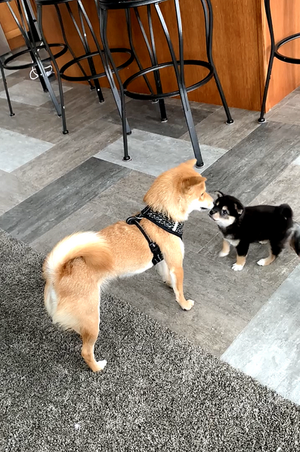 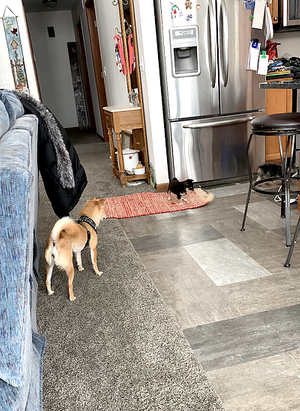 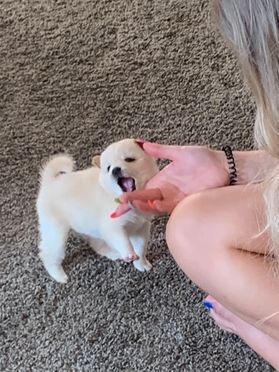 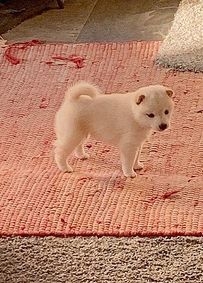 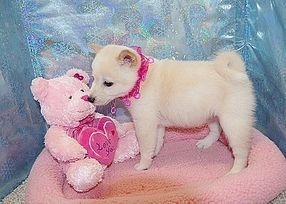 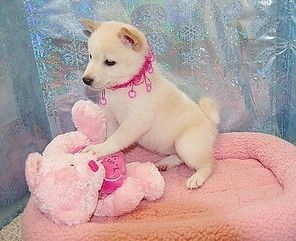 MEET SOME OF OUR AKC PARENTS!!! 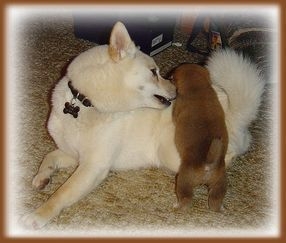 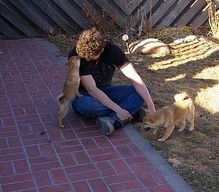 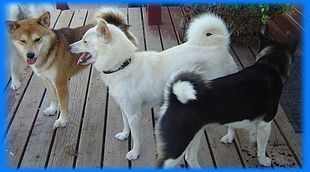 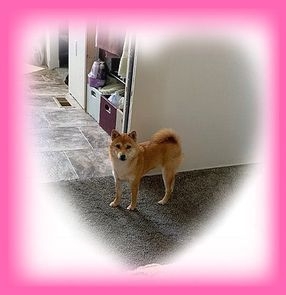 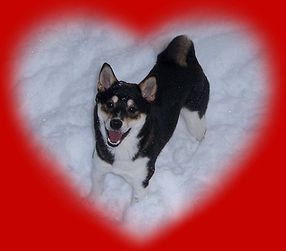 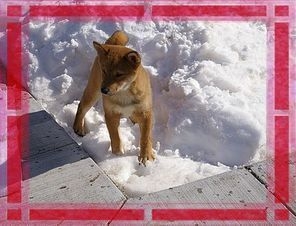 If Shibas have one phrase they live by, it's “what's yours is mine and what's mine is mine,” whether it's sleeping on your favorite chair, dining at your table or taking over the bed.

Did you know that Shiba Inus are exceptionally clean? That's probably why housebreaking is so easy.

JUST SOME OF OUR PAST PUPPIES!!! They are strikingly beautiful!!! 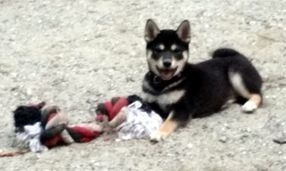 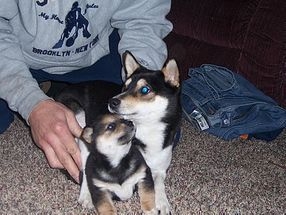 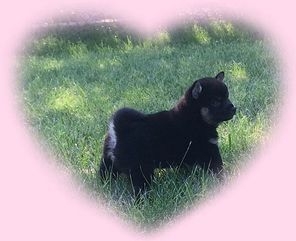 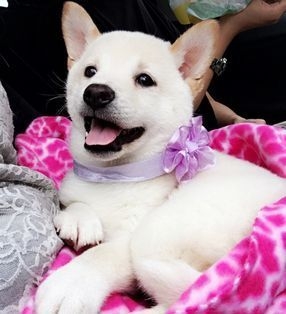 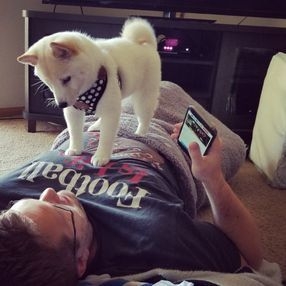 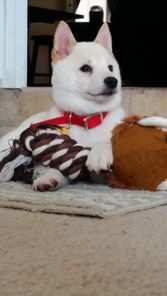 Just a couple of our past Shibas... AWESOME!!! More on our New Puppy Owner pg 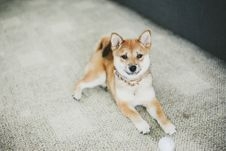 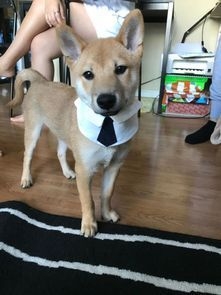 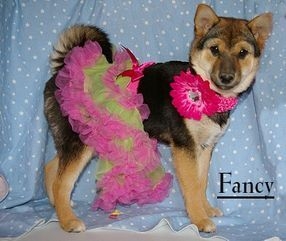 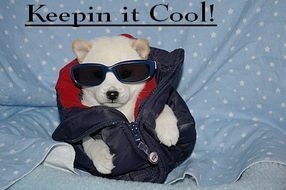 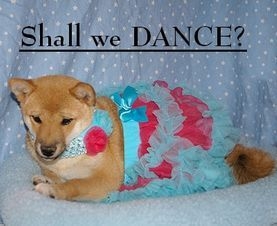 Shibas are adored because they look like foxes, with their pointed ears, red coats, and black noses. They first came to the United States in the 1950s, but they've been gaining popularity in recent years. Here are more interesting facts about the Shiba Inu:

1. This Is an Ancient Breed

The Shiba's ancestors probably accompanied the earliest immigrants to Japan way back in 7000 B.C. Archeologists have found remains of dogs about the size of Shibas in sites that were inhabited by the Jomon-jin people, who lived in Japan from 14,500 B.C. to 300 A.D. The Shiba Inu is likely the result of breeding between the Jomon-jin people's dogs and dogs that came to Japan with a new group of immigrants in 300 B.C.

2. They Were Originally Used as Hunting Dogs

Shibas have been used for hunting both small and large game. Because they are small, they're good at flushing birds and other small game out of the bushes. Shibas are rugged dogs that survived for thousands of years in the mountainous regions of Japan.

3. This Is One of the Most Popular Breeds in Japan

Shibas are currently one of the most popular companion dogs in Japan, and they were declared a national treasure of the country. Many Shibas have become Instagram or YouTube sensations in Japan.

4. Their Name Is Mysterious

We know the word “inu” means dog in Japanese, but we don't know for certain where the name “Shiba” came from. Shiba means brushwood in Japanese, so it's possible that the Shiba Inu was named for the terrain where it hunted. It's also possible that the name came from the Shiba's coat, which is the same color as the autumn brushwood. A third explanation is that the name came from the breed's size; an obsolete meaning of the word shiba is little.

5. There Used To Be Three Kinds of Shibas

Before World War II, there were three types of Shibas — the Mino, the Sanin, and the Shinshu, named for the regions where they originated. Today's Shiba Inu is most similar to the Shinshu, but all three contributed to the modern breed.

World War II almost completely wiped out the Shiba Inu. Most died in bombing raids during the war, or from distemper, a highly contagious canine viral infection, after the war. Breeding programs that began after the war helped the breed bounce back. Most of the surviving Shibas were the Shinshu variety, though there were a few Mino and Sanin left.

7. One Shiba Saved Her Family in an Earthquake

In 2004, an earthquake struck the village of Yamakoshi in Japan. When her family's home collapsed, a Shiba Inu named Mari sprang into action to save her puppies and her elderly owner. She moved her puppies to a safe place and then found and woke up her owner, who had been trapped underneath a fallen cabinet. He managed to free himself and was eventually evacuated from the area by helicopter. He was forced to leave Mari and her pups behind, but when he returned two weeks later he found that they were all alive. Mari's story was made into a Japanese movie called “A Tale of Mari and Her Three Puppies.”

In many ways, the Shiba Inu is more like a cat than a dog. They are independent and can be difficult to train. They also spend a lot of time grooming themselves and tend to be extremely clean.

EMAIL US AT: [email protected]